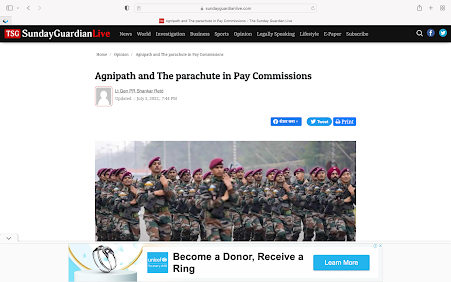 It has been repeatedly stated that models of other militaries have been studied to evolve the Agnipath Scheme. Has anyone studied the benefits accorded to veterans in those nations and militaries?

India is transforming into a regional power of geostrategic importance. Its economic and demographic footprint is enlarging by the day. This rise must be underpinned by a modern military which safeguards India’s interests far beyond its continental borders. While our military is strong enough to guard our borders, it needs a transformation to be able to project India’s influence internationally.  The military transformation must be affordable and make our forces lean ,mean and modern.  This is the underlying intent of ‘Agnipath’. It must be achieved for the sake of our future generations. Currently, the scheme is financially driven. It hinges on deflating the out-go due to military pay, allowances and pensions.   Resultant savings will fund the military transformation. The Scheme has been packaged with the benefits which will accrue to the larger society, military forces and aspirations of the youth. As it stands,  the Scheme has not found favour with large sections of Indian society for many reasons. It is highly doubtful if it will contribute to the operational preparedness of the nation in its present form. The Agnipath Scheme needs reworking.

A major drawback of ‘Agnipath’ is that, the lateral shift or suitable relocation of those exiting the service in huge numbers at an young age into public or private sectors is open ended. ‘Agniveers’ are not Ex Servicemen. Hence none of the quotas and the social security accorded to Ex Servicemen are applicable.  Announcements of quotas by the defence and home ministers in CAPFs, defence PSUS and civilian defence organisations were afterthoughts and mere reiteration of existing reservations for Ex Servicemen which have remained more than 96% vacant. It inspires ‘No Confidence’. If this scheme is to go through successfully, even in a modified form, people must feel reassured of the future of their children and the youth of their future.  It needs a whole of government approach with political sensitivity, confidence and will. Exit from ‘Agnipath’ is currently akin to a jump off from a plane without a parachute. The parachute, to a large extent, lies hidden in successive pay commission recommendations.

Lateral shift of defence force personnel, retiring at an early age, is a long standing problem. In the 90s, the V CPC realised that India needs to optimise on its security related expenditure through a joint and holistic approach. It probably realised even then,  that burgeoning pensions will be problematic in the future. Accordingly, it recommended 25% reservation in Group ‘C’ and ‘D’ posts in CPOs along with lateral transfer. It also suggested setting up of a Joint Recruitment Board with representatives of CPOs and Armed Force to jointly select officers/men who could laterally shift to CPOs after rendering seven years’ service in the Services.

The VI CPC went a step further. It devoted  a full section on ‘Lateral Movement of Defence Forces Personnel” ( https://www.gunnersshot.com/2022/06/lateral-movement-of-defence-forces.html ). CPMFs were increasing recruitment and training to meet increased internal security threats. Simultaneously, a large number of servicemen, with anti-terrorist and counter-insurgency experience were retiring at a relatively young age. They were fit enough to discharge these duties in CPMFs. The CPC  highlighted that the Government was facing an increased pension burden of retired defence personnel still in their prime. It opined that requirement of trained manpower in various CPMFs and providing sufficiently long tenure for Service personnel can be addressed in case they are laterally shifted. It recommended unequivocally that all recruitments to CPOs and various defence civilian organisations should be made with the selected candidates serving initially in the defence forces. It also recommended setting up of a Joint Recruitment Board.

As per the VII CPC Report , the Services pressed the case for lateral movement of defence forces personnel into CAPFs and Defence Civil Organisations. They pointed to the large annual savings which could accrue by way of saving on recruitment, training and  pension payments. They also drew attention to similar recommendations of the V CPC, VI CPC and Standing Committee of Defence. The VII CPC noted that  recruitment of ex-servicemen at various levels was insignificant vis-à-vis others in the CAPFs. It also noted within the Central Government Departments, Central PSUs and Banks,  the deployment of ex-Servicemen was far short of published reservations. The Commission felt that greater thrust was needed since all ex-Servicemen, irrespective of the number of years of service and rank, are suitable for lateral movement to these organisations.

It also recommended that sepoys on completion of seven years’ service in the Services should be allowed to continue or laterally move into CAPFs. The effort of the Government should be to ensure that vacancies of constables in the CAPFs is filled entirely from sepoys exiting in seven years. The option of lateral entry into defence civilians organisations like Ordnance Factories, DRDO, Naval Dockyards, Military Engineering Service, Border Road Organisation, Base Repair Depots etc should be available for all defence forces personnel, irrespective of the number of years of service. Filling of reserved vacancies for Ex-Servicemen in Central Government Ministries/ Departments, Central PSUs and Banks needed a thrust. Significantly, it recommended that in case the Government raises new special forces which involves security / protection, retiring defence forces personnel should be accorded priority. It also recommended measure for seamless absorption in industry, in particular defence manufacturing.

The VII CPC also recommended that the existing institutional framework for dealing with issues relating to Ex- Servicemen should be completely revamped.  Government must focus on gainful employment of maximum  retirees.  Functional and administrative integration of Ex- Servicemen entities at Centre and in the States was also recommended for better implementation. A centralised mobile online app to manage the problem was recommended. What do the combined recommendations of successive Pay Commissions tell us? The problem and remedies were long visualised. If even 50% of these recommendations were implemented, we might not have come to this pass. However, they were never implemented due to a combination of empire building in CAPFs and political expediency.

The Government has belled the cat to transform the military through the Agnipath route. The quick fixes being trotted out are disjointed afterthoughts. These will not meet the bill. The intended transformation is likely to leave behind a legacy of a botched effort. The answers to many vexing questions of the Agnipath and defence modernisation lies the parachutes hidden  in successive pay commission recommendations and repurposing them to make it a success. Depending upon the private sector to resolve the problems is chasing a mirage. The entire effort involves breaking down walls of inhibition and suspicion. It also needs building new institutional arrangements to ensure that Agniveers exiting service are enabled to laterally step into a purposeful way of life. The Governments intent  to transform the defence services to be capable to meet the needs of a rising India, will depend on how well ‘Agniveers’ are handled after serving the nation in uniform. It must take bold and resolute steps with purpose.  A whole of the government effort is needed. The current Government has the political capital to effect real transformation. Whether it has the will to so is another matter.

12 responses to “Agnipath : The Parachute in Pay Commissions by Lt Gen PR Shankar(R)”