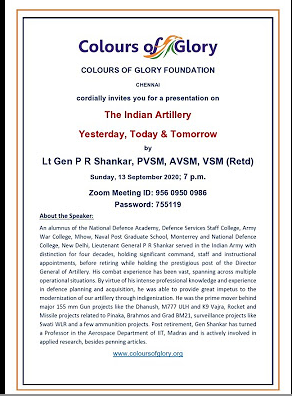 In Sep 2020, I gave a presentation to the Colours of Glory Foundation. The topic was INDIAN ARTILLERY : YESTERDAY TODAY AND TOMORROW. This presentation was made when the face off with China was at its peak in Eastern Ladakh. I am re-posting it since it answers a few fundamental questions which have come up during the ongoing Ukrainian crisis and posits a few more which need answers. The Video is an edited version of the full event.

The full event can be viewed on this link. https://www.youtube.com/watch?v=dAB26xAAgw0&t=11s . The presentation is not slick since it was in the early days of Webinars when we were all on the learning curve. Apart from that you will get an idea of the journey of Indian Artillery.

First. There is hardly anyone who does not understand that India must be Atmanirbhar in Defense. However, there is national and international skepticism whether it can be achieved.

A few days back I had written an article in which I outlined the story of the Atmanirbharta journey of Indian Artillery. The story is :  “ In the 70s, Indian Artillery, like the rest of the Armed Forces was largely made up of Russian equipment. The 100mm Gun, the 130mm M46 and Grad BM21 MBRL made up the bulk of Indian Artillery as the second world war vintage British weapons like the 25 Pr, 5.5 inch and the 7.2-inch Guns were phased out of service. In the late 80s, India also acquired 122 mm Guns from Russia. Around that time, we had three Indigenously designed guns in the form of the 75/24 mm Howitzer, the 105mm Indian Field Gun and the 105mm Light Field Gun. In the 80s, we went in for the Swedish 155mm Bofors on a TOT basis to produce our own medium Guns. However, the ‘Bofors Khand’ and the ensuing investigations put us on a backfoot and all indigenization plans in cold storage. Design, development, or procurement of guns could not progress for over three decades. We could not modernize despite all efforts. For some strange reason, even the indigenous 105 mm gun production line was closed! The Pinaka MBRL program was stagnating.  That forced us to seek the Russian Smerch, long range rocket system early in the century. The nadir was 2010, when we were reduced to a state where we even considered importing second hand 130 mm guns from East European countries in sheer desperation. We were short of artillery ammunition.  We could not wean ourselves away from Russia. Things turned around due to determination, sustained, single-minded and clear-headed effort. Today, exactly 12 years later, we are inducting four new 155mm gun systems (Vajra, M777, Dhanush and Sarang) and a long-range guided rocket system (Pinaka). Our 105 mm Gun production line is going strong. All our new systems are not only non-Russian but are mostly indigenous and of latest technology. Where the equipment is procured from outside, the spares are mostly indigenous (M777 and Vajra). Most of our ammunition including that of Russian origin guns is now indigenous. We have already started discarding vintage Russian guns which cannot be upgraded indigenously. With the Dhanush having cleared endurance trials, Indian Artillery is at present 90% ‘Swadesi’ as well as a model for Atmanirbharta. Very soon we will be a 100% Atmanirbhar Artillery.  This is a model which needs emulation. Very clearly, India can reduce its dependence on Russia through Atmanirbharta. I have no doubts. I can vouch for it since I was fortunate enough to be part of the effort to build our potent and fast-modernizing Artillery”.

This presentation amplifies this story in detail. Notwithstanding this, there was still some scepticism in the air which prompted some one to ask me the question : “We might be producing the guns but do we have the ammunition? Fair question. The answers to such doubts are also answered in this video. The larger issue is that we have a model of successful  Atmanirbahrta which can be achieved in about a decade. We need to suitably tweak it to other situations. we also need to take into consideration the model of Indian Navy in achieving a degree of Atmanirbharta in ship building.

Second. The Ukrainian War has shown the value of Firepower in battle. Do we have the Artillery to hit back at our adversaries when the time comes?

This video gives an answer to that also. However to put things in perspective, we have a strong Artillery which has delivered the goods consistently to the nation and will continue to do so. However from Kargil to now, an adversary called PLA has been added over and above the Pakistan Army . If we are to tackle both of them, the new Artillery, Air Defence , Air Force and Special Forces need to be meshed into a seamless ‘Instrument’ called “Firepower” through Surveillance, Intelligence and Information. This integrated Firepower will win us battles and wars in conjunction with  our indomitable Infantry and Armour. If Firepower  continues to be treated as a “Support” system then we are in a regressive mode.

There will be some who will say that why am I repeatedly bringing this point up in my writings?

I am afraid that the Indian Army thinking is largely trapped in the the rut of ‘close battle’. On the other hand the need is to be effective to execute the deep battle. In the Himalayan terrain, it is the ability of our forces to bring to bear firepower in depth which will either deter or dislocate PLA in case it resorts to any misguided adventure. This needs a lot of introspection and thought – in understanding firepower, refining our operational outlook and matching it with proper HR/MS policies to fight the ‘deep battle’ in the Himalayas. Currently the Indian Army leadership is drawn by regimental lanyards from the well of ‘close battle’.

It will also do us well to understand that the Russian Forces are seemingly stagnating due to  terrain friction caused by ‘Rasputitsa’ or mud thaw. In an environment where mobility and manoeuvre is restricted, they are however overcoming terrain friction by the reach of Integrated Firepower to achieve political objectives. Air, hypersonic missiles,  cruise missiles, guides missiles, rockets and tube artillery have been used systematically as per a clear plan to maintain momentum of the battle. Similarly, it will be Integrated Firepower which will overcome the terrain friction of Himalayas to achieve national interests. It will promote mobility as I has written in my articles https://www.gunnersshot.com/2021/11/firepower-and-artillery-futuristic.html and

I do hope the next CDS thinks of ‘Firepower’ differently and not merely as a supporting force and puts in place policies and structures to Integrate the Indian Armed Forces to fight as a whole. But where is he? That is a political question. Is it not?

One response to “The Indian Artillery :Yesterday, Today and Tomorrow”