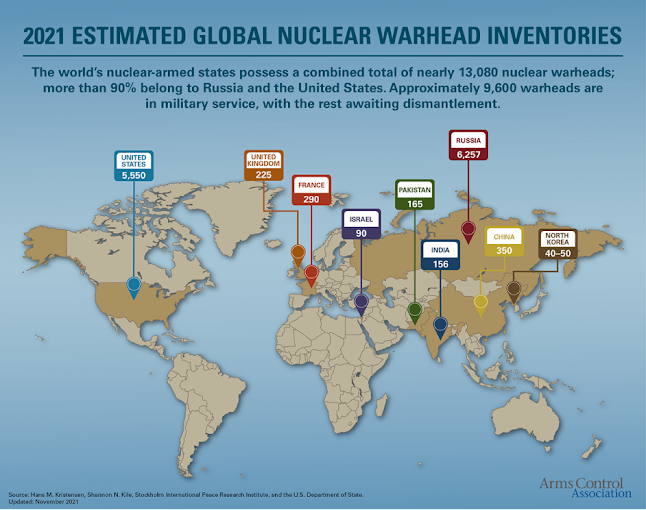 Mr Putin gave a highly emotional and charged speech when the Russian operations into Ukraine commenced. During his televised talk he gave out a warning  “To anyone who would consider interfering from the outside – if you do, you will face consequences greater than any you have faced in history.” It was a direct and unambiguous nuclear threat.  The threat was repeated a few days later when Russian nuclear forces were put on ‘special’ alert  after‘aggressive statements’ over Ukraine by NATO leaders. The nuclear card was again flashed when the Russian foreign minister Sergey Lavrov warned of a ‘third world war’ which would be ‘nuclear’ and have devastating consequences. Three threats in a week from a nation which has the biggest stockpile of nuclear weapons is significant. Such belligerent intent in many ways seems analogous to the description of Russia being  “a gas station with nukes.”

Contrast this with the Ukrainian situation. In 1991, Ukraine inherited a nuclear stockpile  which was the third largest after USA and Russia. By 1994 it had given up its nuclear weapons and completely disarmed itself along with Kazakhstan and Belarus. Imagine for a moment. If Ukraine had retained even a handful of those nuclear weapons, would Russia have dared to set foot into Ukrainian territory in 2014 when it annexed Crimea? Today’s situation would have never arisen. In fact, Russia and Ukraine might have been equal partners of  the inherited Soviet influence and power. This was underscored earlier,  at the Munich Security Forum by Ukraine’s president, Volodymyr Zelenskyy where he stated that they had made a mistake abandoning the nuclear weapons they inherited from the Soviet Union. He was of the opinion that nuclear weapons were the only way to guarantee Ukraine’s sovereignty. Many more in this world would agree with this thought process.

Two nuclear trend lines have been brought into sharp focus which will upend the uneasy  international nuclear balance. The first trend line is that nuclear coercion can and will be used by established major powers to enforce their expansionist designs as Russia has done now. The direct situational co-relationship  lies in Taiwan. China might make a similar play to warn others off, if and  when it seeks a military reunification of the Island nation. What will the resultant be? Will USA just stand by supinely as it has done now and allow Taiwan to be gobbled up? New debate. New equations. The same play can occur if China seeks a forced foothold in Bhutan, Nepal or even Myanmar.  The second trend line is that nations aspiring for nuclear weapon status will be even more motivated to attain that status. They will see it as the only way to guarantee their own sovereignty against expansionist designs or external interference. Those which do not have  nuclear weapons will make a pitched effort to ensure they have it. One can clearly foresee that the international nuclear equations are going to get rebooted. Already  a debate has been kicked off.  Time to see what lies in store ahead.

Countries with nuclear weapons and their estimated inventories are shown in the map above. Besides this, USA, Russia, China and Pakistan may (most probably do) possess smaller tactical nuclear warheads, which are over and above this count. Countries like North Korea continue with their  nuclear pursuits and proliferation with impunity. Iran, Syria, Saudi Arabia, Libya, Taiwan, South Korea, Japan, Argentina, Brazil and South Africa are the nuclear dark horses with some degree of nuclear aspirations (past and present). These are the  worst kept international secrets. It is worth examining some of the aspirational trendlines.

South Korea and Japan live in a fairly charged up nuclear environment consisting of China, North Korea and Russia. In both these countries there has been a recent public debate over nuclear weapons. This debate got sharpened by the Ukraine situation.  The debate in South Korea is illuminating. Many South Koreans feel that while North Korea is the immediate short term nuclear threat and China is the long term one. The majority in South Korea favour acquisition of nuclear weapons indigenously as the way forward. The lesser alternate for South Korea is allowing deployment of US nuclear assets on its territory. Reliance on US assets has its own set of issues. The Russo-Ukraine situation could just prompt South Korea to cut loose the apron strings of USA and go into an indigenous mode to acquire nuclear weapons. Currently Japan is sheltered by the US nuclear umbrella, but with the weapons placed elsewhere. The Sino-Russian entente and the Russo-Ukrainian situation has prompted Mr Abe, ex PM and an influential but respected voice, to  suggest that Japan should consider a nuclear-sharing arrangement with the USA similar to NATO. Which means that US weapons will be on Japanese soil. The very thought breaks a taboo and  has stoked an intense debate within the country. However, the nuclear rethink in Japan , which has all the technology to develop  nuclear assets cannot be ignored. Turn to Taiwan, which has three nuclear power reactors, which produce about 10% of the island’s electricity. Very clearly it also has all the technological knowhow to build a bomb in its basement. If it comes to light that Taiwan has a bomb in its basement, the cost for national reunification for China would be incalculably high. If any of these nations acquire nuclear capability, China will in all probability change its own status and policy on use of nuclear weapons. That will trigger a domino effect on India. Getting the drift? What if this trend line extends to other aspirational nations?

It is also no secret that China is increasing and modernising its nuclear arsenal with a fully functional triad capability at an unprecedented speed and scale. The  country could have up to 700 deliverable nuclear warheads by 2027 and at least 1,000 by 2030 as per estimates.  It is also looking to nuclearize its hypersonic systems which are under development. Further its space ambitions indicate that, it could be the first to deploy space based nukes in the near future. Chinese believe that an enhanced and potent nuclear capability strengthens the nation. It will enable China to project power and nullify containment efforts by the USA and its Western allies. China believes that a bigger arsenal would make its rivals respect and exercise more self-restraint when dealing with it. This hugely expanded inventory and capability  also gives them the power of coercion over smaller countries in the same way Russia has used its nuclear card in Ukraine. However what one must also factor in is that, China has the experience of financial coercion through debt trap diplomacy. The expanded nuclear capability is an additional arrow in the Chinese geopolitical quiver. As China is changing the nuclear balance, the current situation has added a new dimension of menacing Chinese ambiguity.

The Pakistani nuclear trendline  is unique. It developed nuclear weapons to seek parity with India. It was aided and abetted by China and USA at various points of time  when it suited their purposes to do so. However the situation has changed. At one  level, Pakistan’s possession of nuclear weapons and its stated policies remain oriented to ward off the (imaginary) existential threat from India. At a more practical level, nuclear weapons with Pakistan serve the purpose of keeping the Army at the pole position of the power structure in the nation. Pakistan must be the only nation wherein nuclear weapons are not in the hands of the government but under the control of its Army cabal!  In China, the PLA is the Armed Force of the CCP and not of the Chinese nation. The Pakistani army has taken this a step further. The nukes and the nation are both owned by the Pakistani Army. Strange but true. The overall Pakistani canvas is a fragile picture of an unaffordable but expanding nuclear arsenal, a failing economy, a floundering political system, a radicalised society and a self-serving Army. The base of this canvas is the national raison d’etre of ‘Not Being India’ with an accompanying visceral hatred towards anything Indian. The subterranean factor is that the danger of passing on nuclear weapons or technology to state/non state terrorists coming out of Pakistan’s  radical assembly lines set up by Zia Ul Haq and co. The Pakistani nuclear situation keeps adding instability and gives new ideas to the unsavoury versions of this world.

Amongst the other nuclear dark horses , it is Iran which currently aspires and actively seeks nuclear status. While  the current aspiration is for peaceful purposes, tomorrow’s thinking might be different. If that happens,  the nuclear cauldron in this part of the world will get crowded. More importantly the Indo Pacific strategy of QUAD and other extra regional players will need a nuclear element. Even more importantly if and when what I have outlined materialises, global power would have shifted irrevocably to Asia. It has huge attendant ramifications. If the dark horses in other continents also rev-up, we are looking at a totally different dimension.

The whole idea of this analysis is not to predict an unlikely nuclear armageddon but a likely reality which is unfolding. India has to do some serious introspection. The fact that we are a rising power is well known. The fact that we are a nuclear power with a fledgling triad capability is also well known. The fact that we need 360 degree ‘Atmanirbharta’ is getting reinforced with each passing day of this conflict in geometric proportions. The fact that international defence spending will go up is underlined by the German announcement  to hike its defence budgets. Let us make no mistake, the Russo-Ukraine conflict will alter the geopolitical and geoeconomic landscape. It has already set the nuclear snooker balls into motion. However the larger question is the requirement to modernise our capability in terms of focussed warheads, delivery, surveillance, intelligence, command, communication and control capabilities. The question is also to put in a credible anti-missile defensive system in place. The question is also to review our nuclear policies so that our deterrence is credible. The question is also to put in a credible conventional non-contact deterrence capability in place which complements our nuclear policies. That brings one back to good old firepower! There is requirement for some good old brainstorming in this evolving format. Whether it is done in open forums or behind closed doors , as most of it must be done, is for those who matter to decide. However, the fact that the Russo-Ukraine conflict has triggered something for us to agree upon and acknowledge. I am confident that those who matter will also be scratching their heads.