Till last month Pakistan was the kingmaker. After all it had put the Taliban in the Afghan throne. It was sitting in cloud nine. Their PM , their foot in the mouth Foreign minister and  that mousy NSA were imploring the world to recognise Taliban or else….till the Taliban said that Pakistan International Airlines would be banned to fly into Kabul. Ever since then the trio have gone quiet on their students. They stopped celebrating their newfound status of kingmakers and reverted to their  traditional state of happiness. After all Happiness is a Pakistani state in mind.

This article is a set of extracts from Dawn editorials over a couple of days. The authors very clearly express the  state of current happiness in Pakistan. I have just added my comments at the end of each facet of Pakistan’s happiness.

The sense of déjà-vu is unmistakable. Khyber Pakhtunkhwa is in the grip of an unfolding nightmare, one that the country had hoped to never witness again after the military operations in the area some years ago…. four security personnel were martyred in KP’s Bajaur district when a roadside bomb exploded near the Afghan border…. a sepoy fell in the line of duty during an exchange of gunfire with militants.

These are but the latest in a spate of militant attacks… in the tribal districts contiguous with Afghanistan…since August when the Afghan Taliban came to power . Several security personnel have also been martyred during intelligence-based operations undertaken to neutralise terrorists before they attack.

2021 has witnessed a precipitous rise in violence-related fatalities in KP. In fact, there was an increase of 73pc in such fatalities between just the second and third quarter of 2021, with security personnel comprising the largest proportion of victims — a significant shift in the pattern of militancy where earlier the civilians bore the brunt.

Of the nine terrorist attacks reported in September, eight were claimed by the banned Tehreek-i-Taliban Pakistan. The Afghan Taliban reportedly remain in control of the areas bordering Pakistan that have provided a sanctuary for the TTP and from where it is launching attacks….the TTP is clearly on another trajectory, one that has nothing to do with peace. It seems determined to intensify its onslaught against the security forces, and may in fact see conciliatory messages from the government as evidence of weakness. We are witnessing the beginning of what could be another extended cycle of violence if the situation in Afghanistan remains fluid.

My Comments. Finally the chicken have come home to roost. Ever since independence, Pakistan has played its dangerous game of exporting Pashtun Nationalism to India and Afghanistan. There is nowhere else to go send it now. Pashtun Nationalism will flower and fester in Pakistan. The real existential crisis has begun in Pakistan. This trouble is not getting away even if Taliban Khan grovels at the feet of TTP and PTM. India should watch out  for attempts at once again  redirecting Pashtuns into Kashmir. 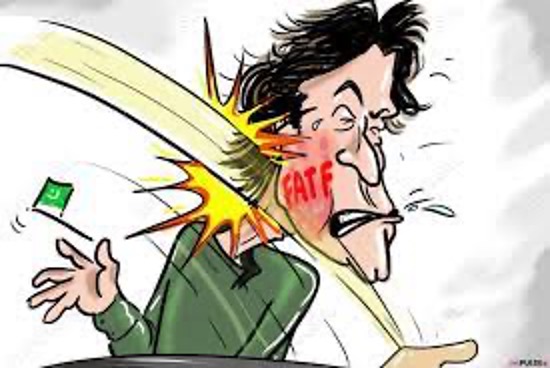 Pakistan’s hopes of exiting the so-called FATF grey list have been shattered once again. The global money laundering and terrorist financing watchdog decided to keep the country under enhanced monitoring for another four months. It asks Islamabad to take quick action and to “continue to make progress to address as soon as possible the one remaining CFT [combating the financing of terrorism]-related item by continuing to demonstrate that [terror financing] investigations and prosecutions target senior leaders and commanders of UN-designated terrorist groups”. Thus, the major challenge is to act against these individuals.

Pakistan is also required to demonstrate an increase in money-laundering investigations and prosecutions, and to continue to restrain and confiscate the proceeds of crime and to work with foreign counterparts to trace, freeze and confiscate assets. The question is: are we ready to take these last steps out of the grey list?

My Comments. After what happened in Afghanistan, it would have been facile to think that Pakistan would get off the gray list. In fact it is happy that it has been joined in the cell by its bosom friend Turkey. Erdogan and Taliban Khan can sit together and compare notes on who is grayer than the other.

As the pandemic slows down, global markets are showing a massive rise in agricultural and mineral prices — with severe implications for commodity-importing countries, including Pakistan…the rupee depreciation has worsened matters. It makes imports costlier and life more miserable for lower and lower-middle-income households. Shipping costs which have increased five- to 10-fold since the opening up of the global economy…Pakistan is importing millions of tonnes of wheat and sugar that have to be made available to the population at subsidised rates. This will impact Pakistan’s dollar reserves. According to the Economist, global food prices have risen in 13 of the past 15 months and are close to their global peak in 2011….The finance adviser is reportedly claiming that Pakistan has become a net food importer due to the faulty economic policies of the last 30 years. He is not wrong but regrettably, those wrong policies continue to be implemented.

My Comments. Pakistan’s principle of attaining happiness is driving in reverse gear. A nation which was a net exporter of wheat and food is now a net importer. Food insecurity in Pakistan stems fundamentally from water insecurity. These two are the werewolves which will devour Pakistan. The existential threat to Pakistan is within.

A stand-off over the appointment of a new head of the Inter-Services Intelligence Directorate between the two main components of the incumbent hybrid system is continuing and the atmosphere appears so thick with tension you could cut it with a knife.

It does not take rocket science to figure out why each of the two sides is taking the stand it is but the resultant mess is clearly not good for the fragile economy and will most likely spell the end of the hybrid power-sharing arrangement which was so meticulously put in place a mere three years ago.

It is clear that the hybrid performance over the past three years has mostly resembled a train wreck and now that the continued devaluation and the consequent inflation have eroded the common man’s ability to even have one, what to talk of two square meals a day, public anger is mounting.

This has forced a rethink among the key architects of the system as things have not gone according to plan. The horse they bet on to romp home a winner with a flourish turned out lame, unfocused and generally disinterested in anything concrete save for flitting from one vague idea to another.

My Comments.  I am waiting for the familiar storm. Let us see which skeleton comes out of the cupboard.

The proscribed Tehreek-i-Labbaik Pakistan (TLP) warned on Sunday that its workers will stage a sit-in in Muridke, where they are currently encamped, and then move to Islamabad by Tuesday evening if their demands are not met….”The government has gone back on its word thrice. This time we will sit and wait,” said a statement issued by the proscribed group’s leadership council on Sunday. “No one will go home until the entire TLP leadership, including chief Saad Hussain Rizvi, comes to the container and makes an announcement,” said the statement. “Even if a member of the council says go home without Saad Rizvi, you may shoot that leader too,”

My Comments. TLP back in action! The future course of Pakistan is reflected in this movement. Another werewolf which Pakistan has given birth to.

Addressing the CPEC Summit at the Institute of Business Administration (IBA), the special assistant to the prime minister (SAPM) on CPEC affairs accused the United States of conniving in cahoots with India against the economic lifeline of Pakistan.

The SAPM said Islamabad is seeking the expansion of CPEC to Afghanistan and has discussed the possibility of Taliban-led Afghanistan joining the multibillion-dollar economic corridor.

My Comment. The SAPM needs to correct himself. CPEC is not Pakistan’s economic lifeline. It is a Chinese noose around its neck. USA and India do not have to connive to derail CPEC. That is being done by the Bajwa’s of Pakistan by diverting funds into Papa Johns. Let us also not forget that the attack on Chinese workers which has completely halted work on the Dasu dam was carried out by home grown Pakistanis. Last heard that China was seeking 42 million USD as compensation for lives lost in that attack. Well. Well. Well.

All the major opposition parties in the country took to the streets to protest against the government. The PDM alliance, led by the PML-N and JUI-F, held rallies in Karachi and Lahore with other demonstrations in parts of KP where political leaders hit out at the government…As these parties and their thousands of supporters call out the government for rising inflation and unemployment, the matter of the yet to be signed summary of the spy chief’s appointment looms large. Meanwhile, in Washington, talks with the IMF appear to have failed, giving rise to further uncertainty. As if the government did not have enough fires to fight, Lahore and Islamabad are on tenterhooks as a result of a mass protest by the TLP — at present the most potent threat of them all.

My Comment. The opposition was feeling left out. so they have remade their appearance. It is sort of predictable. They have to make their presence felt since these rallies will strengthen their individual cases to be part of the Hybrid experimentation in Pakistan if Taliban is booted out.  However the more important thing in this report is that IMF has adopted a hard line now. That is the latest facet of happiness in Pakistan.

Overall Comments. The kleptocracy called Pakistan has screwed the West. It is screwing itself now. I am sure some brits are tuning in their grave at their creation. The current generation of Americans will be wondering as to which previous administration they can blame for making Pakistan into the kleptocracy it is. From my side they should not feel guilty….they have unleased their final weapon against China…when the history of China is written in future some one will realise that their down fall started with their espousal of a kleptocracy called the Hybrid Governments of Pakistan. Happiness is a Pakistani state of mind…Cheers…