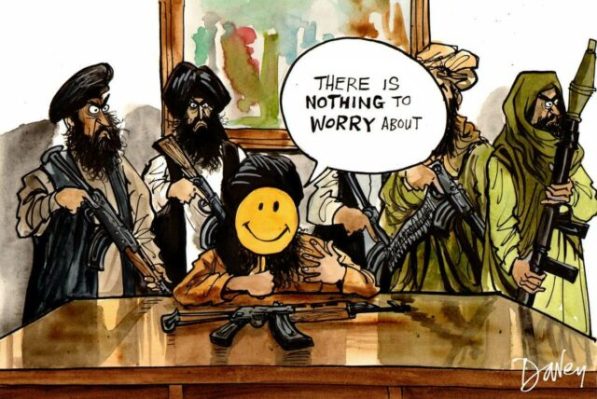 The Afghanistan Fallout in Pakistan

The Afghanistan Fallout on China

The Afghanistrtan Fallout on India

The Naya World Of Naya Taliban Created by Naya Pakistan

Yesterday’s revolutionary is todays leader. However yesterday’s Taliban remains todays Taliban. If  you are  looking for a Che Guevara, Mao Zedong, Zapata, Robespierre or Trotsky equivalent to drive an  epochal change in Afghanistan for a different tomorrow, then you are suffering from poor eyesight cum brain fade. This is a revolution in reverse gear at top speed without a rear view mirror. The Taliban executed a lightning military campaign but its government is dawdling in cloudy skies! If the Ghani government was a puppet of the USA, the Taliban government is the puppet of the Sino-Pak nexus. Having seen Afghanistan’s  fallout on India, China and Pakistan, it is time to see the fallout on Afghanistan itself. 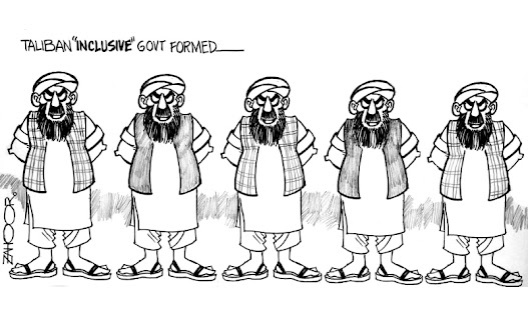 More than three weeks have elapsed since the Taliban have assumed power. It won the war in lesser time than it has been able to put together even a caretaker government. The government is dominated by  Pashtuns from one part of the country – Kandahar. It is exclusive and hardcased with moderates side-lined.  Wild eyed, long bearded hardliners with proven smuggling and terrorist credentials who could be fungible with Al Qaeda or IS have vaulted into power. Only Pakistan, China or radical and terrorist organizations have welcomed this development. The rest of the world is looking in consternation that Afghanistan should not once again become a sanctuary for terrorists to attack other countries. China is also worried that the example and motivation provided by Taliban can enthuse radicals to attack its BRI projects / interests world-wide and cause a flareup of insurgency in  Xinjiang. 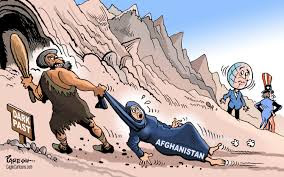 The Northern Resistance has announced that it is forming a parallel government having made a tactical withdrawal from  Panjshir Valley. It is slowly but surely turning into an insurgency. IS-K is clearly  a terrorist trouble maker to the Taliban. The tilt of the government indicates that non Pashtun warlords will reappear. There are protests on the streets which have forced an internet shut down. Significantly, many protests are led by women. The Taliban response has been more  violent than the protests themselves. Each edict passed by the Taliban is driving women, who constitute 50% of the population, back to the stone age. Steadily, this government will represent only the non-Shia male Pashtun population. The emerging situation, spans social unrest, insurgency and civil war simultaneously. The government might be stable at gunpoint but the country will totter continuously. 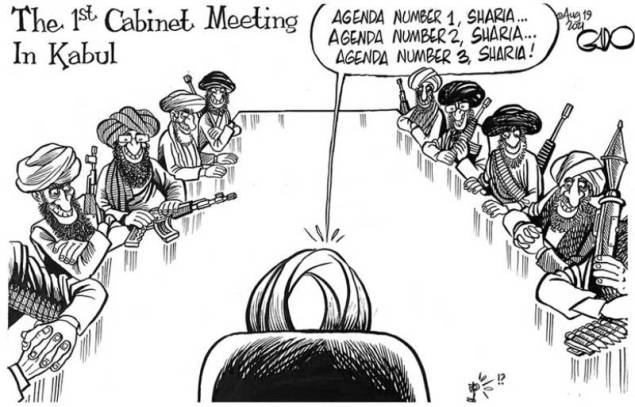 The Taliban spokesperson has indicated at a  pure Islamic system where all matters of governance and life in Afghanistan will be regulated by Holy laws of the Sharia. What exactly  are these? No one knows. Their supreme leader Hibatullah Akhundzada has never made a public appearance or statement. Sirajuddin Haqqani, a designated terrorist with a bounty on his head, rarely seen or identifiable is the Minister of the Interior. The  mullah-maulvi-terrorist led Taliban government’s aim seems to be limited to re-establish an Islamic Emirate. If early indicators are of any value, women are banned from all sport.  Whipping /caning / lashings of women have recommenced. Journalists are being beaten black and blue if they cover protests. Education  seems to be limited to the ‘holy book’ to be ‘pious’. As per the new  education minister all other education has no value. When Taliban governance takes some definite shape, Afghanistan would have auto navigated into a humanitarian crisis of hunger, hardship and human rights in absentia. By then It will be a safe haven for extremist groups. China has welcomed the formation of such a government as the ‘end of three weeks of anarchy’ when the actual bout of interminable anarchy is all set to begin. The walk and the talk of Taliban are on different paths. Everyone is watching for action and not words. The action so far, is a back to the future scenario. The probability  of a catastrophic global terror strike will increase by the day as time passes in this Pakistan created – Taliban regime. 9/11 redux is on the cards. 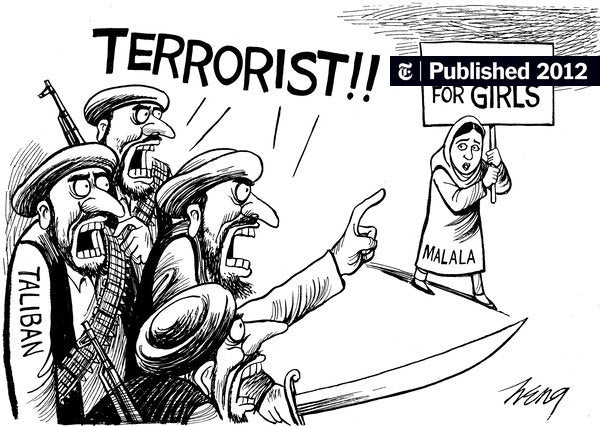 International reaction to the new government in Afghanistan is laced with caution and dismay. The world’s major aid agencies, who provided around 80% of the old government’s budget, are watching the action closely. International sanctions imposed on the Taliban restrict financial transactions and businesses. These have to be complied with by all those in the international system. Even China, which Taliban has declared as their strongest ally,  cannot circumvent that. Physical money is not available for day to day transactions. Without a credible government in place to ensure security, no largescale mining or resource extraction can take place. Everything in the Taliban scheme of things is based on getting international recognition and credibility to their regime. It is very doubtful if that can come through in a hurry. As of now, there is no basic system or organisation even to deal with the humanitarian crisis of acute lack of food and medicines which is fast unfolding. Dark days ahead.

There is no doubt left that the Talibs are a creation of Pakistan. The government formation was as per Pakistani wishes. It has emerged as the ‘Sutradhar’ of emerging ‘Taliban Afghanistan’. It has managed to put in the Haqqani Network, a terrorist organisation, in power. If reports are even partially true, Pakistani boots have landed formally in Afghanistan to deal with the Northern Resistance.  With the nebulous situation likely to continue, the boots are there for staying in all probability. Whether the strategic depth will turn into a bottomless quagmire will unfold in future. Pakistan has also announced dispatch of humanitarian assistance comprising food and medicines to Afghanistan in three C-130s. After the first immediate tranche through air, further supplies are promised through land routes. If Pakistan, of all countries, has to provide aid, then the situation is really bad. The overall situation will deteriorate faster than thought. Very soon Taliban will turn to Islamabad for more help. Pakistan with its limited cash reserves ($20 billion) and a high debt-to-GDP ratio (90%) for a population four times the size of Afghanistan is as it is a failed experiment. It is under the FATF gray list. It is to go under the IMF stipulation regime. China has been rethinking on investments in Pakistan due to security concerns. So where does it leave the Taliban – Pakistan – China nexus? Most importantly, the Pakistani hand has polarised the situation completely. It has also led to a spike in violent incidents in Pakistan in border areas.  As much as the instability in Afghanistan, we must expect instability in Pakistan. Prepare for it. 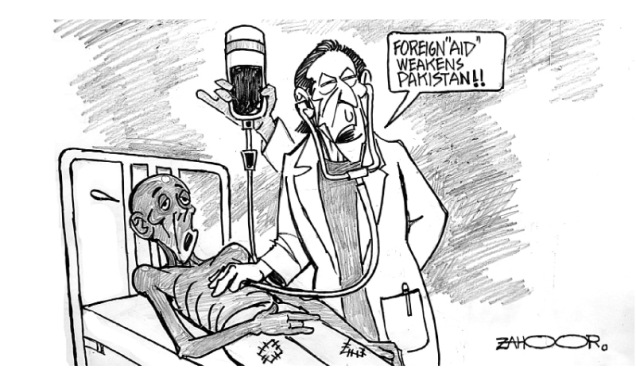 Many protests in Kabul and other cities are vehemently anti Pakistan. This sentiment will increase since many Afghans hate Pakistanis. They know that Pakistan can only destabilise Afghanistan. The Pakistani hand has already alienated Iran; which has changed its tune, now that USA is out. It  is highly allergic to Pakistani machinations. Iran has drawn its red lines saying that obligations under international law should be observed. It has warned about foreign meddling in Panjshir. The Irani spokesman stated that “Afghanistan’s history shows that foreign intervention, both direct and indirect, has resulted in nothing but defeat for the aggressor force, and the Afghan people are independence-seeking and zealous, and certainly any intervention is doomed. Humanitarian law under international law must be respected.” Iran is seeking a government that includes all ethnoreligious groups. Further north, Turkmenistan and Uzbekistan are vulnerable to the Taliban instability spill over. Tajikistan’s long-time ruler Emomali Rahmon has opposed the Taliban vehemently. He has expressed concern about the presence of international terrorist groups in Afghanistan. He  has also stated that he  would reject an Afghan government “created by humiliation and ignoring the interests of the people of Afghanistan as a whole, including Tajiks, Uzbeks and other non-Pashtun ethnicities”. While Tajikistan might not actively oppose Taliban, it will support the cause of Tajiks in Afghanistan. The Northern Resistance will find its bases in Tajikistan. The Russian position will drift to align with those of the CARs. India and Russia have begun talks to protect the CARs. Teaming up with Iran, Russia and CARs is an opening to India which it must actively pursue. China is uncomfortable with the developments though it has announced an aid package of 31 million USD. This appears to be some sort of bribe to Taliban. One can be confident that Taliban will take money from China to supress ETIM. Simultaneously it will take money from the West to propagate ETIM. It will blackmail both for funds with the terrorism threat. Pakistan has taught  this trick well. Incidentally the new Taliban Army Chief has deep links with ETIM. As far as the USA is concerned, its fond hope that the Taliban 2.0 will be a reformist society is turning into a sour one.. 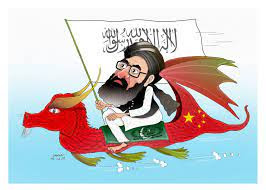 If one sums up everything, the future is a country which will be under three regional pulls – Iran, Sino- Pak nexus and the Russo-CAR axis. The overarching expectation from the larger international environment of the USA, EU, India and UN, will continue to get frustrated. Internally the Taliban will face an insurgent Northern Resistance, a terrorist IS-K and a social fabric in disarray. The Taliban itself will continue its power balancing act between its shuras. Overall it will be an economy dependant on outside resources.  State blackmail by terror will be the norm. The future is indeed bleak for  Afghans and Afghanistan. None of the educated and professional Afghans abroad are likely to return to the country. The handful left behind will attempt to leave it one way or the other. The few who will be co-opted into government will be stifled by perverse interpretations of the holy book. The governance will degenerate further. It is difficult to think of anything else. Afghans in Afghanistan will lead a life of deprivation. Afghans outside Afghanistan are consigned to being second-rate citizens in the countries of their residence as refugees or illegal immigrants. I will end up with a thought. The people of a nation or region always get what they deserve and wish for. The status and plight of Afghans is a reflection of the social and tribal fabric of the people of Afghanistan. While it is very natural to feel sorry for them, it is also a matter of reflection that Taliban would not have gained power but for the support of Afghans themselves. Afterall insurgents always swim and survive like fish in the sea of people. If this issue is seen in the correct perspective, it will be prudent on the part of India to wait and watch to see which way the cookie crumbles. We should not rush into Afghanistan where even angels have feared to tread but Pakistanis seem to be loving to get baked. 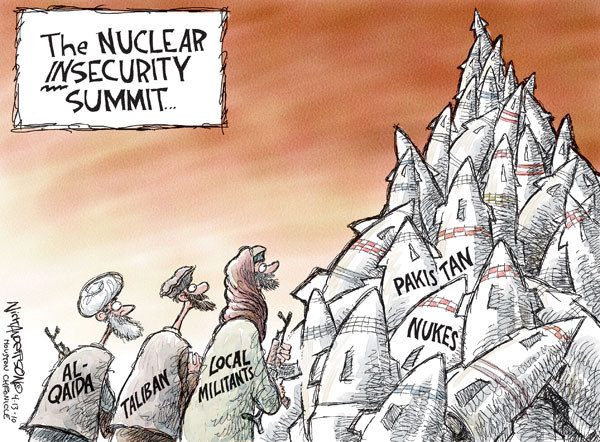 PS :- Sincere thanks to all those who made these cartoons. They are depicting a reality which we need to see.