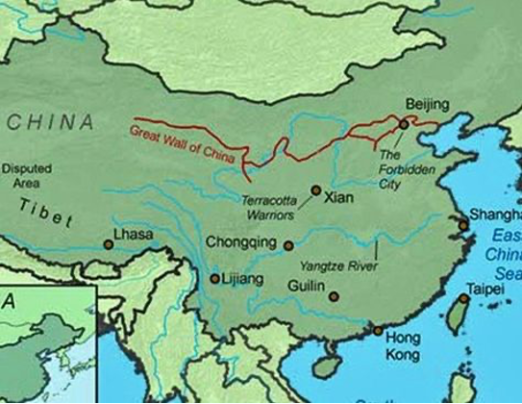 When Indian and Tibetan flags were waved at the funeral of Company Leader Nyima Tenzin of Special Frontier Force who  died during the Kailash Range operations , there was widespread belief that ‘Tibet’ issue will be leveraged. It was short-lived due to haziness in Indian thinking, absolute clarity in China and a return to resigned helplessness amongst Tibetans worldwide. The issue has morphed significantly from the last century and needs deep understanding of new issues and must be played with finesse. Undue military action or rebellious violence will end any action being snuffed out like the Khampa Rebellion in the 50s. Relevant issues pertaining to India, China and Tibet need to be brought into focus for India to chart out a future course of action. In this part we will see the legality of Tibet being part of China and Chinese designs in Tibet.

Legality of Tibet Being Part of China

The Great Wall Frontier. Historically the outer frontiers of China were defined by the ‘Great Wall’. It was built by imperial China to keep outsiders at bay. In this context The Great Wall defines the outer limits of Chinese Boundaries.   However there is no ‘Single’ Great Wall of China. There were a series of Walls raised by different dynasties depending on the extent of their empire and what they considered China.  Taking into consideration all the Walls, the areas outside these are definitely outside China. Hence Tibet, Xinjiang, Inner Mongolia and Manchuria were never part of China till such time the PLA under Mao and Communists usurped them based on mythical history.

Suzerainty. Tibet was never part of China. The relationship between Tibet and China was of suzerainty. Chinese suzerainty over Tibet has been internationally acknowledged since long but not sovereignty. Historically, Chinese control over Tibet waned and waxed depending upon the power of the prevalent Chinese Empire. Indian and Chinese civilisations, throughout history never had a common border. Tibet, with its own Flag and Government, was always a buffer state. This buffer evaporated with the Chinese occupation of Tibet.

Illegal PRC Government. Till date the Government in Lhasa is that of PRC. It has not been accepted by all Tibetans. The Government of Tibet headed by Dalai Lama is in exile in India. Also, Tibet has been governed  historically by the Dalai Lamas’ who have been  the religious, temporal and political heads of Tibet. That has not changed amongst the masses or in international understanding. Fundamentally occupation of Tibet by China remains a case of illegal

2003 Agreement. Till 2003, India never recognised Tibet as part of China.  The 2003 agreement which reads “The Indian side agrees to designate Changgu of Sikkim state as the venue for border trade market; the Chinese side agrees to designate Renqinggang of the Tibet Autonomous Region as the venue for border trade market” establishes recognition of Tibet as part of China and Sikkim as part of India. Nathu La pass is mentioned as an entry and exit point and hence is treated as the border by common understanding. In 2003, it was never contended by China that the Tibet Autonomous Region extended South of  Mac Mahon Line. The common understanding was that Tibet was generally North of the Mac Mahon Line even if the line was itself in dispute at some places.  Chinese claim on Arunachal Pradesh as South Tibet started after 2003. In claiming so, the Chinese have actually violated their commitments of 2003. The Chinese have violated all Sino Indian agreements in their current aggression in Eastern Ladakh. In view of both these facts, it is perfectly legal that India does not recognise Tibet as part of China. Look at it another way. The Tibet we recognised in  2003 is now in dispute due to additional claims by the Chinese and hence Tibet is not part of China till such time it is defined as to what is Tibet!

When all these issues are taken into consideration holistically, there is no doubt that Tibet is not part of China and PRC is occupying it illegally.

Historical Design. Chinese occupation of Tibet in the last century is presaged on two factors. Firstly there is their historical and convenient misperception that Tibet is an integral part of China. Secondly occupation of Tibet along with the other outliers – Manchuria, Inner Mongolia and Xinjiang will give depth and protection to Core Han China from future land based threats. Having occupied Tibet, and other outlying non Han areas any rebellion or uprising has been crushed lest it affect the stability of the PRC and CCP. 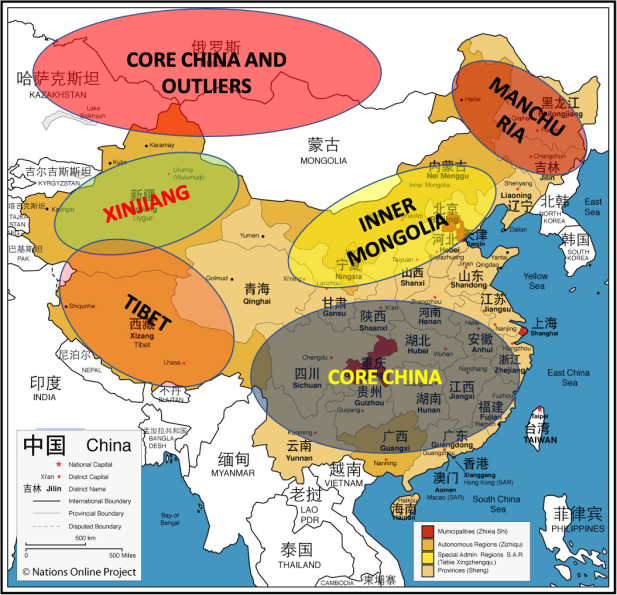 Expansionist Design. Reports keep surfacing about China wanting to annex Vladivostok in Russia, entire Mongolia and some  parts of Kazakhstan and Kyrgyzstan. (A Chinese website  claims that Kazakhstan is  historically is part of China and seeks to “return” to it. Kyrgyzstan, is described by a Chinese  website that it as was part of China for thousands of years). In July 2013 China started propagating the six inevitable wars it must fight to regain so called LOST territories The six ‘inevitable’ wars are for unification of Taiwan (2020–2025), recovery of South China Sea Islands (2025–2030), recovery of southern Tibet (2035–2040), recovery of  Diaoyutai and the Ryukyus (2040–2045), Unification of Outer Mongolia (2045–2050) and recovery  of territory seized by Russia (2055–2060). In doing so it has signalled that these are its areas and it will go to war for them. So it is a combination of planned mythical claims and coercion.

The Himalayan Design. Along the Himalayas it wants to usurp Doklam and Sakteng in Bhutan, parts of Arunachal Pradesh, Parts of Nepal and Eastern Ladakh. It incrementally creeps forward as part of its salami slicing tactic.  It is now widely propagated and discussed that Mao considered Tibet to be China’s right-hand palm, with five fingers—Nepal, Bhutan and the three Indian territories of Ladakh, Sikkim and Arunachal Pradesh—that China was also meant to ‘liberate’. When seen holistically, Tibet and the other outliers are just a base for further Chinese territorial expansion in its quest to become a superpower and dominate the world. The  EU  sums it up by saying  view that the scale of Chinese power and global reach poses acute challenges to open and democratic societies, particularly because of that country’s trajectory to greater authoritarianism and an expansion of its territorial ambitions.

Water Issues. Tibet, is also known as the “Water Tower of Asia,”. It is the headwaters of Asia’s largest rivers, including the Yellow, Yangtze, Mekong, Brahmaputra, Salween, Indus and Sutlej. It is the source of river systems flowing into 11 countries – China, India, Vietnam, Cambodia, Laos, Thailand, Burma, Bangladesh, Nepal, Bhutan, and Pakistan. As  an upper riparian for Asia’s river systems, occupation of Tibet enables China to control the hydrological future of Asia. China is one of the planet’s most arid regions. Its own rivers are either too polluted or silted to meet its water requirement. Hence, in another context,  it must possess Tibet to meet its future water requirements also.

Dams on Brahmaputra. Building  huge dams on Brahmaputra , upstream of where it enters India and diverting the river waters into mainland China meets Chinese water and energy security requirements. However the consequences for India and Bangladesh will be disastrous and destabilising from any point of view – water availability, water variability, ecology and lifestyle change and locally induced  climate change. As China develops an elaborate system on  the Brahmaputra to meet its water requirements,  it needs to be protected and provided depth. Hence the importance of usurping Nepal, Bhutan, Sikkim and Arunachal Pradesh.   The ‘mythical’ five finger theory ascribed to Mao and depth for its water security are convergent issues. Either I must be daft or illiterate or reading about the wrong China all these years. The first time I have heard of this palm and five finger theory is 2020. How ingenious and conveniently has history been manufactured and propagated! The Chinese seem to have brought out Mao’s Palm straight from his mausoleum to use it here for historical purposes.

Communising Buddhism and Solidification of Tibet. In Aug 20, China embarked on a Solidification of Tibet program. Its multiple components were propounded by Xi Jinping: “solidify border defences and ensure frontier security”,  “impregnable fortress for national security and enduring peace and stability” and “Tibetan Buddhism should adapt to socialism and to the Chinese way of life”. Hence what we are going to see is increased military activity along the Sino Indian LAC which will draw heavily on the lessons of  its failed campaign in Eastern Ladakh. This will be the base for Chinese military forays South of the Himalayas to continue its expansionist program. Secondly we will see replication of Xinjiang style human rights abuses through detention centres where Tibetans will be used as forced labour as well as be imbibed with  “patriotic education” nee brainwashing with communist ideology. We will also witness mega projects being executed which will bring in Han settlements as part of the ongoing demographic change plan. There will be a detailed and sustained attempt to  “Sinicising Tibetan Buddhism”.  This could result in evolution of a new religion based on  communist Buddhism with Xi Jinping as the its Dalai Lama! The pattern is familiarly Chinese. 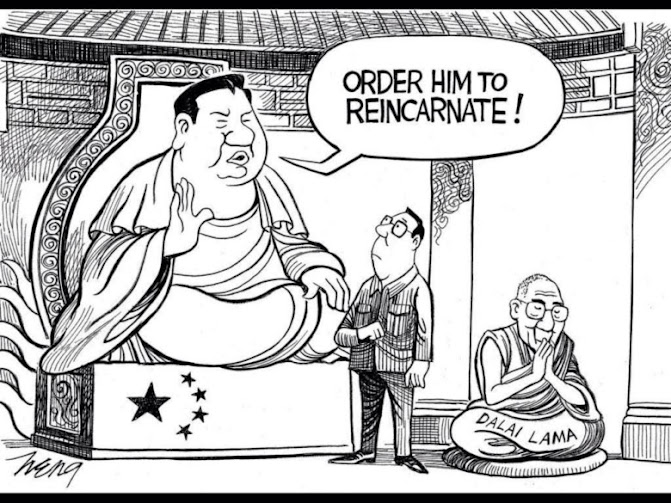 Overall one sees a sinister Chinese expansionist plan which does not bode well for India. It needs a coordinated,  consolidated and a sustained response since Indian sovereignty and integrity is at stake here. There should be no mistaking the danger India is facing.  A proper response will evolve only if we understand the issues related to Tibet and evaluate our own position. That will be in the next Part(s) of this series.