THIS ANALYSIS IS A SORT OF ‘MICROWAVE WEAPONS FOR DUMMIES’ KIND. EASY TO GRASP FOR THOSE WHO HAVE NO CLUE ABOUT TECHNOLOGY BEYOND A POINT 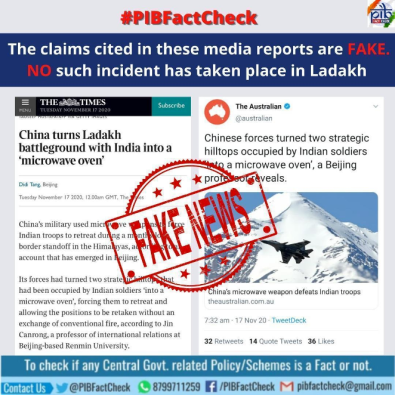 Jin Canrong, a professor of international relations at Beijing’s Renmin University claimed that China had used a “microwave weapon” to retake land that had been occupied by the Indian Army on the southern bank of the Pangong Tso . He claimed that Chinese forces had turned two strategic hilltops occupied by Indian soldiers “into a microwave oven”, forcing them to retreat, and allowing the positions to be retaken without an exchange of conventional fire. “Within 15 minutes of the weapons being deployed, those occupying the hilltops all began to vomit. They couldn’t stand up, so they fled. This was how we retook the ground,” the professor (does he really exist?) reportedly told his students during a lecture. This report was filed by the ‘The Times’ in UK and in ‘The Australian’. The Indian Army has rejected this report as fake. The matter should have ended there.

However, I got inquiries from good and concerned people whether this news was correct and whether the Army was rejecting it as a matter of  routine. They were worried about the welfare of our troops. So I did my digging in and found that the whole report to be as fake as the Chinese. Now by  merely  saying that the report is fake won’t do. I will prove it so. So let us start at the basics.

Armed Forces have been actively and constantly pursuing non-kinetic weapons systems known as Directed Energy Weapons, (DEWs). DEWs could be based on lasers, particle beams or microwaves. These weapons are devices which deposit requisite energy on targets to achieve a given level of damage. Alternately, every target needs a certain level of energy transfer over a period of time to be damaged. Hence the DEW must produce much more energy at source, since a significant amount is lost in propagation. They tend to be bulky and need large power generators.  The first thing one must understand is that DEWs are not hand held systems. 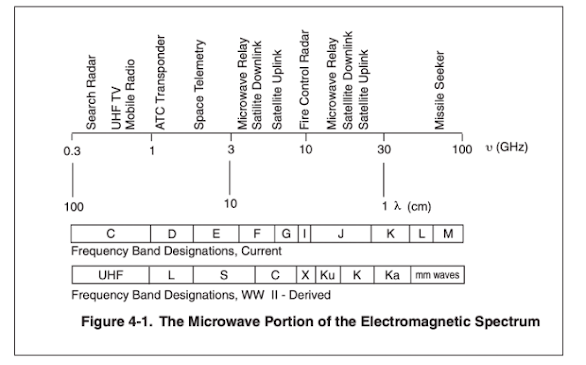 This story is all about microwave weapons and henceforth I shall stick to them.  The interaction between microwaves and water is employed in microwave ovens. Since water is a major constituent of organic matter, microwaves are absorbed in foods placed in the oven and heat them. Yet they are not absorbed in ceramic dishes, which don’t contain water. In this way, the food is heated while the dish itself remains cool. Microwaves are emitted from a directional antenna. Microwaves  travel along  line of sight. If the object is directly not visible, it is not affected. Due to the large wavelength of microwaves, they spread much more than light for given  aperture sizes. It means that their effective ranges are limited. Rain and water vapor restricts microwave propagation. If a laser beam is like a bullet shot from a rifle, a microwave beam is more like the shot from a shotgun. Through divergence, the energy spreads with distance, and the effective range is less. Microwaves  are unsuited for the precision destruction of threatening targets. Rather, they are ideal for an array of targets, hoping that most will receive a dose of energy sufficient to exploit internal vulnerabilities and result in target negation even at intensities below that required for physical destruction. Microwave based DEWs are generally best suited for soft targets  having a built-in vulnerabilities which microwaves can exploit. Their best potential use is against electronics. 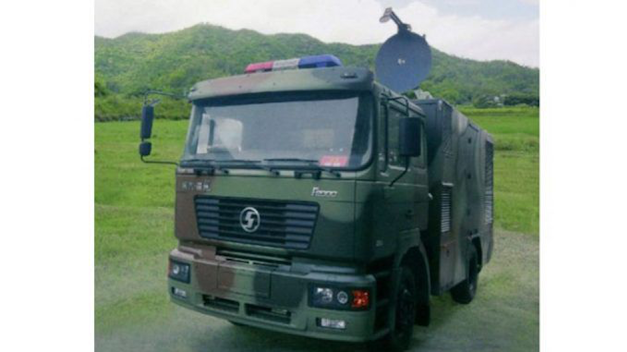 The Active Denial System (ADS), is a non-lethal DEW developed by Raytheon in 2004 for the US military. It is designed for area denial, perimeter security and crowd control. It works on microwaves being directed at targets which heat their surface, such as the skin of targeted human being. The microwaves incite movement in the fat and water molecules located just below the human skin surface, making the target feel like they are burning from the inside. As soon as the target steps away from the ray, the pain ceases, purportedly leaving no damage to nerve endings and blood vessels, which are located deeper below the epidermis. The ADS was deployed in 2010 with the United States military in Afghanistan, but was not used in combat.  In 2010,  it was evaluated by Los Angeles Police Department  for prisoners control.   As of 2014, the ADS was only a vehicle-mounted weapon, though U.S. Marines and police were both working on portable versions.  The system can be seen on the you tube links @ https://www.youtube.com/watch?v=kzG4oEutPbA and https://www.youtube.com/watch?v=u9p5naCkz2w .

The Chinese have a similar system called Poly WB-1. It  is a non-lethal microwave projector that can be used for crowd dispersal, by making its targets feel like their skin is on fire. The  WB-1, presented at the Airshow China 2014 in Zhuhai in November 2014, had a range of about 80 meters, though it can be expanded to 1 Km. However achieving ranges of 1 Km means considerable extra power. Extra power is always at a premium in High Altitudes. The system can be seen on the You Tube @  https://in.video.search.yahoo.com/search/video?fr=mcafee&p=Poly+WB-1+you+tube#id=1&vid=74bb32e686750948e2452890c8a97466&action=click

If you have seen the videos you will realise that any microwave system is based on a huge truck/platform and needs large amount of power(200 KW). It has a huge silhouette and outline which is unmistakable. It has limited ranges and a limited beam width. To be effective, the system has to be quite close to the target. Most importantly the DEWs are non-lethal with only momentary effect. The effect fades the moment you are out of the direct line of the microwave beam.

If the Microwave weapon produced such drastic results (as claimed),  that troops occupying two hill tops fled, then there are two companies involved. Then at 100 least causalities – with symptoms of severe vomiting and burning – would have come to light. My authentic sources- operational and medical – report no such causalities.

Secondly, our troops would have reported having seen an ungainly vehicle closing in. No such vehicle was sighted. Very importantly, the vehicle needs a road to come as close as 100m of own positions. All hill tops occupied by us would have access through an op track  which would have been barricaded at the first instance. Hence the story fails here. However let us take it forward. Any two hill tops are at least a few Km apart. If the claim is true, the Chinese would have had to use more than one DEW. In which case they would have made a great show of it. More over if two hill tops were vacated, the Chinese would have been all over the town and media as to how Indian Troops (scared of the ten feet tall Chinese) had decamped seeing the might of PLA!

The Microwave DEW is a line of sight weapon with limited range and beam width of a human being (at best). It would have to be aimed and fired from a lower height towards men at higher heights and defiladed to the line of fire. No way these chaps at heights can be hit. If the effect was as claimed, each man had to be targeted steadily for at least 15 minutes. If you step out of line, you are safe. Logically, if a man senses danger in combat, he hits the ground! The moment he does that he is safe from the ‘Chinese Microwave’. This whole affair looks like a bedtime story when you are travelling on the silk route and gazing at the stars above. Impossible to execute unless you are high on cannabis. There is no way this weapon can target 200 men on a hill top together except in the drunken haze of Shanghai Waterfront bars after six drinks. Also the men on hill tops would be tactically deployed and spread. Surely they were not waiting all bunched up together to be microwaved by the great Chinese Wonder Weapons!

Also think. The heights involved are 4000-5000 m. The hill tops would have been awfully cold. We all know that all machines underperform by about 30-40 % at such altitudes. This Chinese vehicle portable microwave oven is no exception. My guess is that even if our men had been targeted by Jin Canarong’s imaginary Chinese Nobel Prize winning vision,  it would have only served to warm them. They were otherwise freezing with cold. ‘Good Open Air Heater’.

Very importantly, the claim is that this entire Microwave episode took place in the last week of Aug. However after that the Chinese and PLA have gone all over town cribbing that India should vacate the South Pangong Tso Heights otherwise they will attack us. Which they have not had the guts to do till date. On the other hand India has gone and occupied more heights above Finger 4 in Sep. If the ‘microwave theory’ is true and good, then it should have imposed caution on us and we should not have expanded to occupy other heights.

As of now, India is occupying all the features as I had explained in my Sino- Indian Logjam series @   https://www.gunnersshot.com/2020/11/sino-indian-logam-chinese-three-card.html. No one has vacated anything. This entire episode is a FAKE EFFORT. It was  probably tailored to spin a positive yarn to domestic audiences through foreign media. That is why it was released in UK and Australia. The Chinese will now doctor even those reports to tell domestic audiences that the foreign media has reported that the great Chinese war machinery has microwaved India!

The Chinese desperation tells a story and a morale. DO NOT VACATE KAILASH RANGE AT ANY COST. All this is a ploy.