THE CORONA COMBAT : THE FOURTH REVIEW . ON TO A FRONTIER SANS MEDICINE by Lt Gen P R Shankar (R) 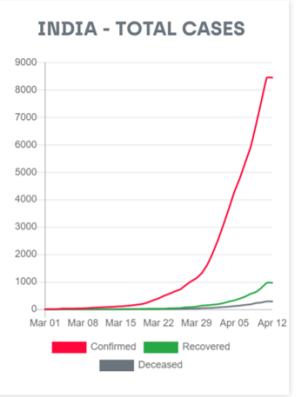 There are no silver bullets
First Review: https://palepurshankar.blogspot.com/2020/03/the-corona-combat-review-of-situation.html
Second Review :  https://palepurshankar.blogspot.com/2020/04/the-corona-combat-second-review-by-lt.html
Third Review : https://palepurshankar.blogspot.com/2020/04/the-corona-combat-third-review-by-lt.html
General
Day 20.  Phase1 closing out. India on top.
Phase 2 starting shortly. It seems that there is no getting away from lockdown. Details shortly. Will not second guess it. We have done extremely well so far.  Ahead of the curve. The Chinese Virus held at bay. Phase 2 will be a grind. Long haul to roll it back. We are in a battle in a ‘frontier sans medicine’.
Democracy is visibly at work. Good to see the PM talking to CMs, past PMs and Presidents, Opposition and the cabinet. Fantastic to see CMs giving out their views. Corona has forced our diverse leaders to come together! Do they have any other choice? The common message was – save the common man at any cost. I am confident when this is over India will emerge a great power. Compliments to our leaders for rising to the occasion.
Studies coming out of the West with prescriptions for India are well-intentioned. Good aids. No more. Everything in India vastly differs from abroad. Outliers like Tablighi Markaz, Migration, Unreported cases of health care workers being attacked, and their second order effects are beyond comprehension of outside writers. Another example. The number of male infections is 2-3 times female infections in India. Abroad, it is almost equal. Discussed it with someone with intimate knowledge of UP. A plausible reason emerged. Men do ‘bottle parade’ all around the countryside (specially on railway tracks) and do not wash their hands. It is established that Chinese Virus transmit through feces also.  QED. Can someone in Cambridge or Michigan or John Hopkins dream that there is no water beyond the ‘bottle’. And soap? Forget it. We need to solve such Indian problems with Indian solutions.
Enemy
The enemy is well entrenched. Attempting to paralyze us. It has not mutated. Seems less effective in India. It has started to spread its wings.  Sooner or later it will break down our walls and make deep inroads into our society if we are not vigilant. Besides hitting us through asymptomatic cases and making a second wave reappearance, it has shown that it can re-infect people in South Korea. That is dangerous. Herd immunization concepts at risk. This needs further urgent study.
Crystal clear that a vaccine is minimum 18 months away. After that? Another 18 months for production, distribution and implementation of immunization programs.  7 billion doses are involved. There are collaterals with Vaccines. They are no silver bullets in the offing.  Expect no curative or therapeutic medicine for this Chinese Virus before a year. That is the essence of a CNN interview with Bill Gates (yesterday). Stark reality is that we will have to live with the Chinese Virus without a medicine or vaccine for up to three years.
We will ‘sleep with your enemy’ for long.  Lock downs temporarily buy us time.  We must seek other solutions.
Own Forces
Climate. The climate is hovering around 32-36 deg C in India with high humidity in the South and dry atmospheres in the North. Temperatures are set to go up. The weather does not favor the Chinese Virus. Good news.
Case status. The current status of cases is in the graphic below. The lock down so far was to bubble up the cases vertically and not let them go into fission mode laterally. We have been successful so far. We could have hit cases in lakhs. That is clear.

The infection rates in states tells us:-
The state wise data conforms to the overall trend (table above).
The Southern states appear to be stabilizing. The Northern states are on the rise.
Kerala and Himachal are fattening. For the first time the number of infections were lesser than recoveries. (see graphic below). Fantastic. Let us hope this trend continues and expand to other states. 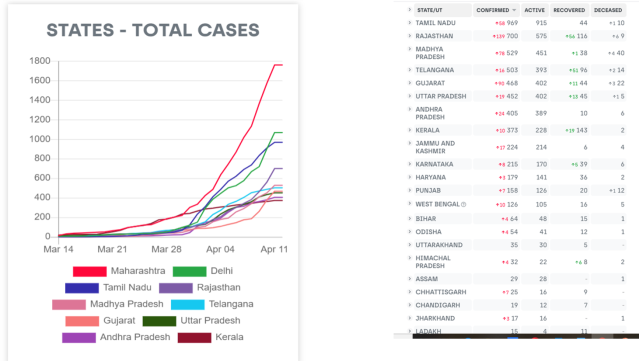 Maharashtra and especially Mumbai is most affected. Even in Mumbai, which is the worst affected, 1761 tested positive out of 31841 samples. That is a case discovery of 5.5 % only. Not bad still  in the international context.

Testing. India is testing around 15-18000 personnel daily. This capacity is increasing. However, training of personnel for testing could be a funnel. Secondly. to test at levels of S Korea, USA, Germany or Russia we will need 8 million test kits. Equivalent to what the rest of the world needs. Hence there is a finite limit to testing despite the call of “Test, Test and Test”.  However some random testing in various likely hotspots /existing hotspots and a sprinkling elsewhere will give us a better idea.
Fatality Rate.
In the absence of testing, the mortality rates are the best indicator. Even in this parameter, Indian rates are among the lowest in comparison to temperate and tropical countries.

The problem area is clearly Mumbai which accounts for 45% of India’s death cases and 1/8th of all infections. Prepare for a major outbreak while the state government controls it. The Centre should now start thinking of contingency plans for Mumbai.
As per other inputs received, deaths due to other causes have gone down by about 30% globally. There has been more than 40-60% reduction in heart attacks in New York as per NY Times of 06 Apr. Even in Delhi, cremations in Nigambodh Ghats are down by about 30%.
With further data inputs, a clearer picture should appear. The evident issue is that things are going well.
Hotspots. All governments are now tuned to handle hot spots as they emerge. This will be a recurring phenomenon for the next three years. No getting away.
District Wise Spread. Not all districts are as affected. The table below indicates the number of districts per states on a case interval basis. 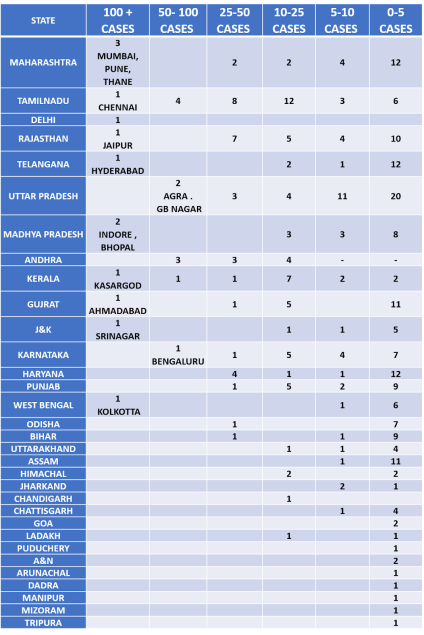 If district data is organised, the number of districts in a state with a level of cases emerges. . Also there are several districts without any cases. The district wise case data tabulated (two days back) indicates as to how many districts and cities are badly affected. There is a   requirement of a flexible approach. Cannot be one size fits all approach.  The district wise map for Maharashtra, the most affected state confirms this.
Co-relationship
We will not have a medicine or vaccine to deal with this Chinese Virus for quite some time. it will be endemic to our society. It cannot be eradicated with available options or resources given the Indian social structure and population density. We cannot keep sitting at home. Lock downs will lose significance and effectiveness. They will become counterproductive given our huge and soft underbelly of poverty, unorganized sector, joblessness and fragile overall economy. So what do we do? Go in for Controlled Herd Immunity. How? 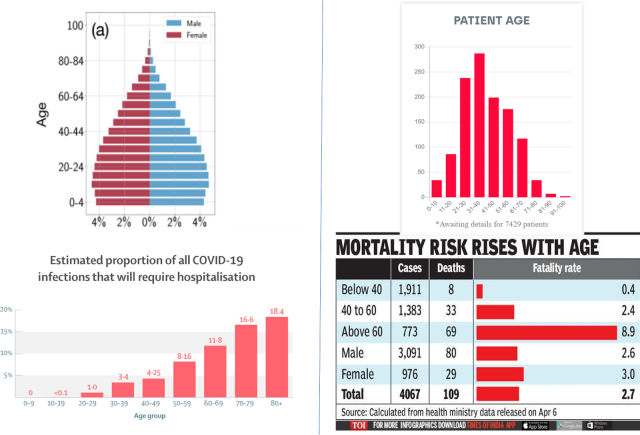 4 responses to “THE CORONA COMBAT : THE FOURTH REVIEW . ON TO A FRONTIER SANS MEDICINE by Lt Gen P R Shankar (R)”